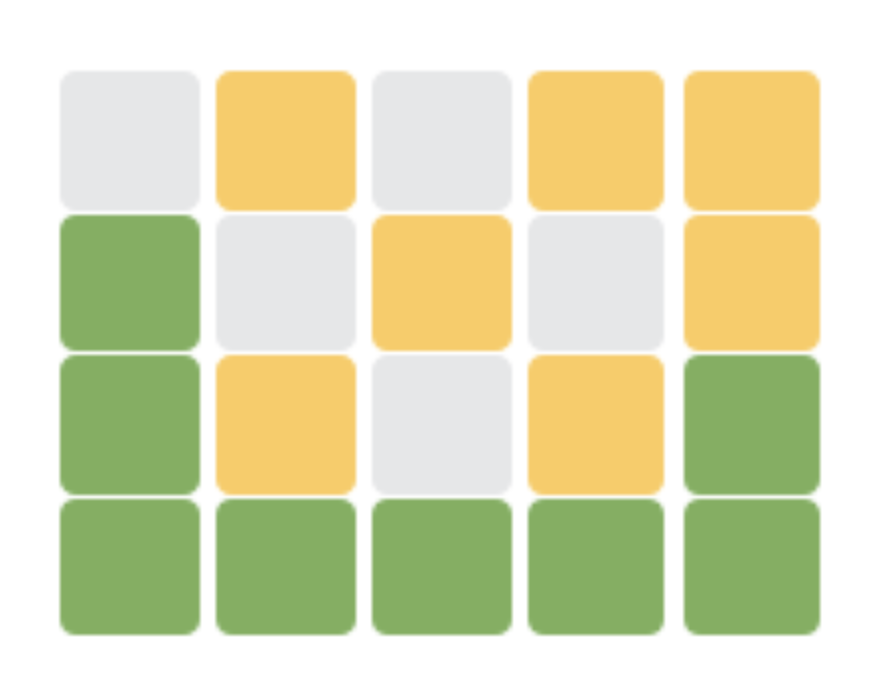 At the ripe age of ten, I was introduced to the game of “Mastermind” by my father. The board game had two players creating and guessing color patterns, with the help of pegs that indicated whether my multicolored guesses were located in the correct spot. I spent hours analyzing the brown, rectangular board and the bright dots it held. The game honed my pattern recognition and sequencing skills, and allowed me to put my mind to the test. Years later, my father would introduce me to another pattern-derived game: Wordle.

“Wordle,” conceptually similar to Mastermind, is a digital puzzle purchased by the New York Times where players input five-letter words to ultimately solve the word of the day. If a letter is shown as green, the character is in the correct position. Yellow letters are included in the word, but are in the incorrect spot, and gray characters are not in the word at all. Players have six guesses to discover the daily phrase. Interestingly, the website remembers internet protocol (IP) addresses, so players cannot attempt the Wordle multiple times.

Wordle spread like wildfire on social media after engineer Josh Wardle created the game for his significant other. After being released to the public in October 2021, less than 100 players visited the site. Now, over two million participants attempt to solve the logic puzzles daily. Commonly heard phrases now include, “Have you done the Wordle today?” or “How many tries did it take you?”

The clear answer behind the popularity and overall addiction to Wordle can be attributed to its simplicity. A daily break from stressful or monotonous workplaces, Wordle provides employees with a short amount of peace and entertainment for a few minutes at a time. In a time of isolation and loneliness due to the COVID-19 pandemic, the game provides communication and rivalries from afar. The game’s clean interface and shareable emoji graph also amp up competitiveness between friends.

Additionally, solving the daily Wordle encourages dopamine release in the brain due to the joy of having successfully completed the challenging game. Conversely, failing to correctly guess the word can create an insatiable need to do so accurately the next day. This frustration and chemical reaction causes players to seek their daily dopamine release via the digital grid of colorful squares.

“Wordle was so appealing because it stimulated both the logic and language-processing areas of our brains,” said psychologist Lee Chambers to Insider. The match confronts players to address their current English language knowledge and pattern recognition skills. Additionally, the game also educates participants on new words. For example, formerly-used words such as “tacit” or “caulk” may have competitors Googling definitions out of confusion.

Wordle’s hysteria has also inspired some themed spin-off games, such as “Taylordle,” the game where players guess Taylor Swift inspired words, or “Sedecordle,” where players attempt to solve 16 Wordles at once.

However, while Wordle creates a competitive atmosphere that keeps players coming back for more, it wasn’t created for the mass-obsession it caused. The game was meant to be a quick test of knowledge, not a mammoth occupying players’ time for long periods. Therefore, try limiting your Wordle dosage for maximum mental satisfaction.

“It’s something that encourages you to spend three minutes a day,” said Wardle to the New York Times. “And that’s it. Like, it doesn’t want any more of your time than that.”