Generation Z on the Presidency 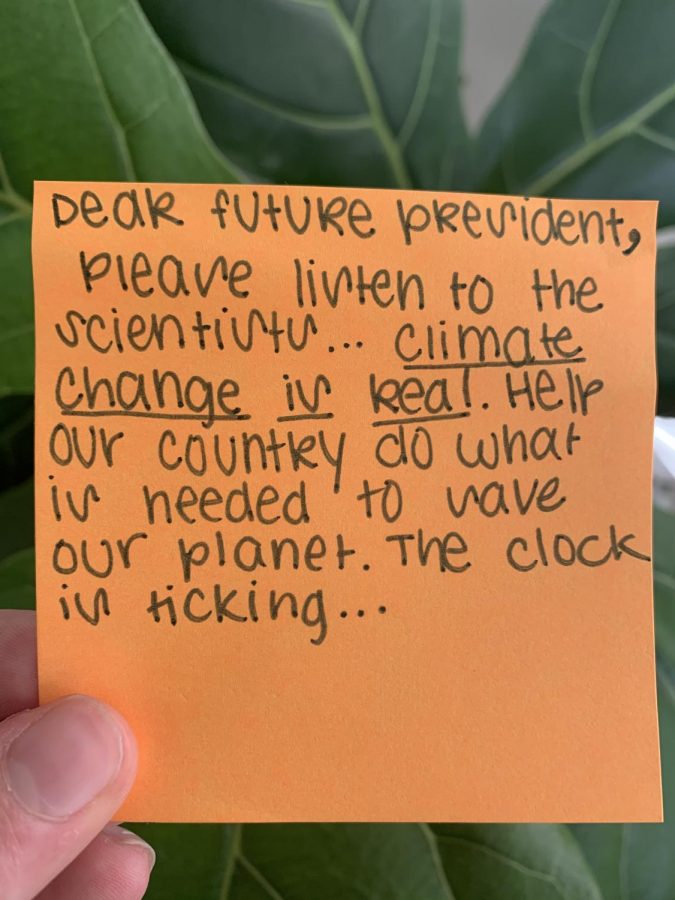 The 2020 presidential election can be described as polarized, dishonest, influential, and even unprecedented as it takes place during a global pandemic. Despite the many points of contention, the election of the highest office in the country is integral to the democracy that forms the bedrock of America. This race is viewed as monumental not only by those who are eligible to vote but also by those who cannot. Students at Castaic High School, while not yet old enough to vote, still have a message for the next president concerning the issues that will inevitably define their future.

Each generation has moments in history that define their beliefs and their legacy. Baby boomers grew up with post-WWII optimism and the age of the hippie movement. Generation X came out of the end of the cold war and pushed into the age of technology. Millennials experienced the great recession, massive technological breakthroughs, and 9/11 (Kasasa). Now, Generation Z is growing up with quarterly lock-down drills to prepare for an active shooter, climate change causing record-breaking fires across our home state, outcries over racial injustice that have been ingrained into the foundation of society, and an unprecedented global pandemic that is still raging across the country. This is the world that Generation Z was born into and these are their crises.

According to Pew Research Center, Generation Z, like millennials, are most likely to see a link between climate change and direct human activity. Climate change is an issue that threatens the health of the world and human survival every day. One student from Castaic writes, “Dear Future President, please listen to the scientists… climate change is real.” This issue is particularly pressing because the decisions that people make today will impact the lives of the younger generation which includes the students at Castaic High School. Another student writes, “we only have one world” and challenges society to take action and “prevent the unimaginable from happening.” These students emphasize the urgency of this issue and how vital it is that the president prioritizes the planet and science because, as one student laments, “the clock is ticking…”

The clock is also ticking when it comes to the health of the nation, as it plummets with each passing day. The United States is now plunging into the third wave of COVID-19 with 227,697 deaths as of today. A student from Castaic High School implores the next President to not “be responsible for the next quarantine.” This student goes on to address the integrity required when taking the position in the highest office of this nation because “it is more important than ever to know exactly what is going on,” and as the President, it is vital that they speak the truth and inform the American people correctly because misinformation is an immense threat to the safety and health of the population. The citizens need to trust the words of the President, now more than ever, since the health of our nation lies in the general population’s understanding of the virus and the science that America is depending on to save lives.

Even though a pandemic has split the world apart physically through mandatory stay at home orders and necessary social distancing, people are still more connected than ever before. Social media, instant messaging, video chatting are all a part of daily life for Gen Z, and it fosters an environment of unity. With that comes strength. Not everyone in this generation might witness first hand the horrors of a school shooting or the fury of a society that lets people get away with murder based on the color of their skin, but they do see it flashing across their screens in the form of viral videos, countless live streams, graphic pictures, and detailed posts. This generation is united by their shared experiences and refusal to resign in complacency. In every hashtag, post, and protest, the world can hear the voice of a generation that will not be silenced.

Generation Z is the most diverse generation in American history and they embrace it. Pew Research Center data cites that 62% of Generation Z sees diversity as a good thing for society, the highest number recorded out of every other generation. Further, 43% of Republicans and 82% of Democrats in Generation Z agree that black people are treated less fairly than the white population of America, which makes this the highest collective percent out of the past four generations. In their notes to the future president, several Castaic students acknowledge the systemic racism that has poisoned American society from its birth. One student writes in their message to the future President, “a person of color could commit a minor crime…and be treated inhumanly and charged more harshly [whereas] a white person could [commit] murder and not be charged.” Another student advocated for corrective behaviors to benefit communities by writing, “we need to start redirecting funding away from the police and to other government agencies such as public education, mental health services, and affordable housing…[to] strengthen communities.” A generation that recognizes, on both sides of the aisle, the current systemic racism and prioritizes the redirection of funds to beneficial services will mean a future that can serve all of the people in America.

Just like other members of this generation, students at Castaic High School are impassioned by these issues. This fuels their activism:

This generation is spearheading advocacy for climate change.

This generation organized March For Our Lives to demand common-sense gun laws.

This generation flooded the streets for the Women’s March and Black Lives Matter protests because they know equality has not yet been achieved in America.

This generation is SEEING and they are DOING.

Seven in ten Gen Zers expect the government to do more to solve the problems in this county, and it is their passion for these issues that will drive them to the polls. Many young voters have already voted, as MSNBC host Joy Reid reported, a surge of young and first-time voters are flooding to the polls for the 2020 election. Eight times more early votes were cast in North Carolina by citizens ages 18-29 this election compared to the last presidential election, nearly six times more votes cast in Florida, and two times as many in Michigan than in 2016. As well as almost 12% of early voters in Texas are first-time voters. These statistics are eye-opening. This generation is making waves in the fabric of this nation that will be revealed on a much larger scale come November.

Even though only one-third of Generation Z is eligible to vote in this election, that does not stop them, nor the students of Castaic High School, from having an opinion and a message for the next President. The mission of this generation can be seen on a national scale, as well as a local level. The students of Castaic High School and those around the nation are united under a common goal: to build a nation where they feel accepted and safe.

So, to whoever the future President may be: Please listen to those who will have to inherit the world you will design and let the voices of this generation be heard.